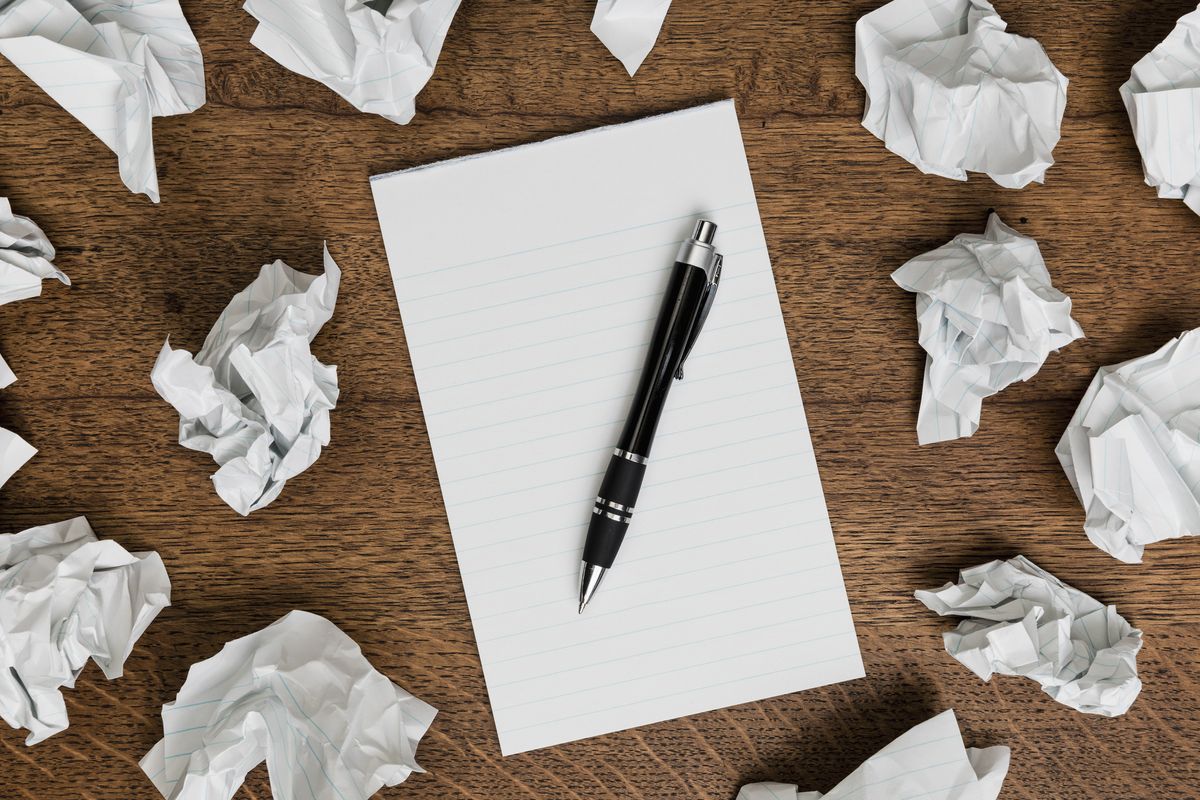 At certain moments of the year, high school students who are applying to college start to worry. It’s time to collect recommendations. It’s time to take the SATs . It’s time to visit campuses. Or, most worrisome, it’s time to write the essay.

On Writing the College Application Essay 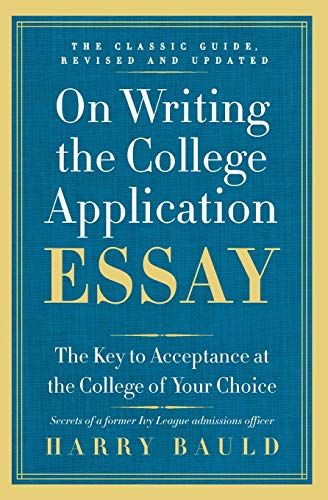 On Writing the College Application Essay

In 1987, during a break between working in the admissions office of Columbia University and teaching high school English at Horace Mann (where he still works), Bauld published a book called On Writing the College Application Essay . In it he laid out prescriptions for how to approach the essay and warnings about what to avoid. Since then, an entire industry has grown around college essay advice, but Bauld’s book (a revised version was released in 2012), and the services he offers as a member of the team at New Bridge Educational Consulting , remains the gold standard.

Fall is prime worry season and we, like so many others before us, reached out to Bauld for advice.

T&C: Do you get a lot of calls from panicked parents this time of year?

Harry Bauld: Absolutely, although at New Bridge we usually work with students who, prodded by their parents, begin in the spring of their junior year and even sometimes earlier. But just two weeks ago I got a call that was very, “It’s Thanksgiving Day and I burned the turkey!” But instead of the turkey it was, “I burned the essay.” So we did three quick sessions.

They become paralyzed because they’re used to writing for people who are paid to like them and help them.

Can you help someone in three sessions?

It depends on how badly the turkey is burned, but even three sessions is helpful for people who don't know what to do. In general, that feeling of needing help comes when a student realizes they’ve written something incredibly conventional. They have become paralyzed by the idea of writing for a readership they do not know, which is understandable, because they’re used to writing for people who are paid to like them and help them. It’s often the good students who just want to get things right who get paralyzed. A lot of what I do is say, “Let’s try writing the wrong thing, shall we?”

You’ve been watching kids go through this for more than three decades. Have they gotten better at the essay?

Yes and no. Yes, because I don’t necessarily have contact now with those who, for example, have read not only my book but the many other books, articles, etc. written about the college essay and just absorb all the advice and go off and do it. I work with people who can’t quite get their heads around it. Sometimes all they need is a little push. Other times they need to find a way to trust themselves more. For those students, in the first or second session, I’ll say, “Do you mind if I record this?” Inevitably, students will mention something they think is a throwaway idea or a joke. And I say, “Go back and do that! Go there!” One of my jobs is to give them confidence. That hasn’t changed in 30 years. 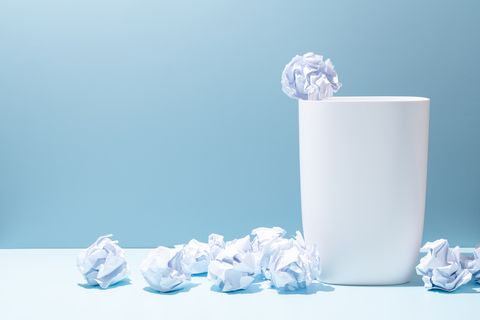 Something that has changed—I know it sounds facile—is that students read less than they did when I started in the 1980s. That’s true even in good schools. You used to be able to assign 30 pages of the Odyssey [per night], now it’s 20 or 25, max. There are so many demands on students’ time, some of which are legitimate. But reading makes you a better writer. If you’ve watched Nadal play tennis closely enough, you have a pretty good idea of how to hit a backhand when you go out there on the court yourself.

Is there more pressure now?

When my book first came out, many top schools were taking 20, 30 percent or higher of applicants. Now Bowdoin, say, is taking 8 percent and Columbia is taking 5 percent. So, yes, more pressure.

Have schools made it harder?

I’m very severe about what has happened in the aftermath of the institution of the common application. The idea was to make students’ lives easier while also making it easier for the colleges to administer their admissions programs. To make it so that students, if they were applying to 12 schools, didn’t have to write 12 essays. What happened, though, is that all the schools reacted with, “Well, okay, so we’ll just plug in all these supplements for students to write.”

So now, in addition to the 650-word common application personal statement, students have three supplemental 250-word essays and one supplemental 400-word essay to write. On top of that, they must also use every chance or opportunity they have to communicate about the things that they are interested in and who they are. When you are allotted 150 characters to describe activities, don’t just make a list. Let them hear your voice. Not, “I play violin.” Instead tell them about your instrument or what you are playing.

Is the “Why Us” question a different type of challenge from the personal essay?

Students think they have figured out how to do this, and they’re partially right. Google everything about the school, get the whole course catalog. If you’re interested in, say, STEM classes, look up the STEM classes and faculty at the school and write, “I'm really looking forward to studying string theory with Professor Knittingbottom.” This is something students are good at. Figuring out what a teacher wants and then giving it to them. But that’s the standard response. I ask, “What else can you add?”

The “Why Us” question is a weird kind of institutional vanity [on the colleges’ part]. The schools’ excuse is, “We have so many applicants, we’re just trying to sort out the ones who are just tossing an application our way.” Meanwhile they’re rubbing their hands together in glee after the huge recent increase of applications. Really, the truth to this question is often, “Because I’m applying to college, I’m a senior, and you have a college program that’s supposed to be pretty good.”

How do you make the most of a bad question?

You start out by asking, why are you really applying? Sometimes there is no good answer. You’re doing it because it’s one of the top 30 schools in the country. Well, then you need to probe and push to find what the personal thing is that is actually underneath your decision to apply. And it differs, and that, of course, is what I'm looking for. I don’t want them to just go through the catalog. This is one of the places where you must look, anecdotally, into your own experience and your own self first. A lot of times for one of these 250 word “Why Us” questions, they’re going to have to write 750 or 1,000 words in different directions until they find something that actually sounds like them. 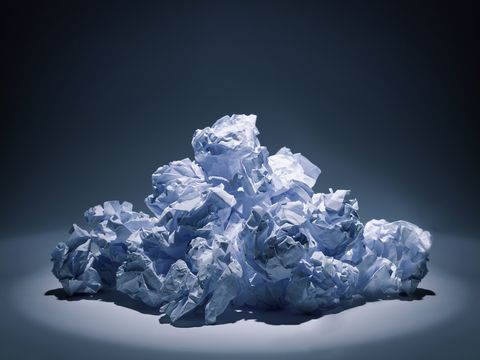 Anyone who has had to write anything authentic for which there are some stakes involved understands that this is the process. There are conventions, you want to kind of acknowledge that the conventions are there and then you want to slightly subvert them. I think “Why Us” really is the toughest supplement. And unfortunately there is kind of a lot riding on that one because of the institutional vanities.

You recommend avoiding certain subjects: the Trip, the Pet Death, the Jock.

It’s about avoiding a formula. For the Jock it would be, “Through wrestling, I have learned fabulous attribute A, incredible quality B, and very, very good thing C.” It’s tempting because everybody tells students, “You have to sell yourself.” And this formula seems as though it does that. But I say, “Stop selling yourself.” Instead, find a way to connect with the reader.

Yes, but that’s the point. If I’m Aaron Judge and I’m coming up on the home run record, if I think every time I have to hit a home run, I’m just gonna ground out or pop up. What I have to do is make contact. “Only connect,” as E.M. Forster wrote. If I make contact with a ball, the home run’s gonna take care of itself because of who I am. And my advice to students about this whole process is the same. Make contact. Just hit the ball in front of you.

It’s a way to take the process back from the universities. They’ve created their conveniences by adding all the supplements. Instead of surrendering to it, take it back. Make contact with what it is that you have to say and use this for your own purpose. Stop trying to get into college and instead start thinking about how you appear on the page. 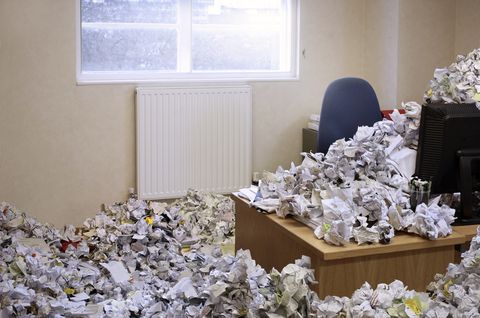 Norman Vanamee is the articles director of Town & Country.