When you think of boarding school traditions, what comes to mind? Senior pranks, secret societies, and formal dinners, perhaps, but for students at Miss Porter’s School, in Farmington, Connecticut, there’s more than just ceremony, there’s evolution.

In 1992, when I was a 16-year-old sophomore at the school, I protested alone against police brutality after the Rodney King incident. My demonstration attracted a crowd of peers and was featured on the front page of the Hartford Courant , but even as a teenager I did not feel quelled. Today student pushback is the norm; not only do high schoolers have more awareness in their worldviews, they’re unafraid to express their perspectives about their communities. From walkouts to student-created Instagram pages calling out concerns about being “Black at…” various top-tier schools, race and other identity issues have been a simmering concern.

Katherine G. Windsor, the head of Miss Porter’s since 2008, doesn’t mince words when it comes to her intention to steer the school’s students into a future where their voices will need to be heard. “Preparing young women to shape a changing world,” she says when asked to state her mission. For an all-girls boarding institution that’s nearly 200 years old, the idea might sound modern, but in fact it harks back to the wisdom that started it all. 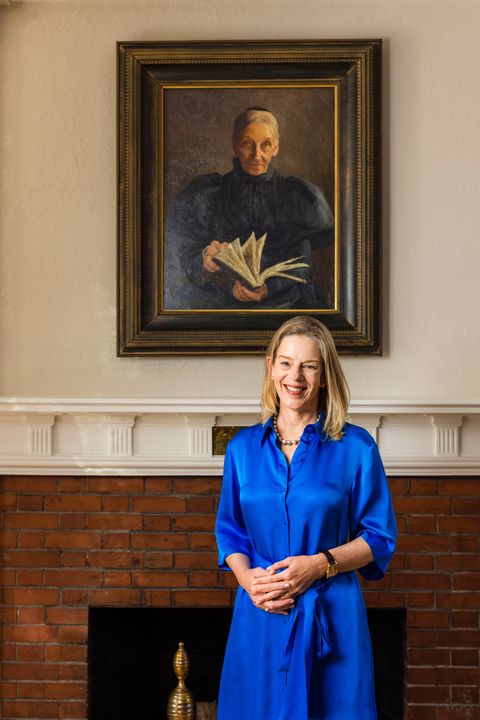 Dr. Katherine G. Windsor, Miss Porter’s head of school since 2008, in her office on campus. The school has welcomed students including Jacqueline Kennedy Onassis, Gloria Vanderbilt, and the actor Mamie Gummer since it opened in 1843.
MISS PORTER’S ARCHIVES/STEPHEN WANG PHOTOGRAPHY

Sarah Porter, a teacher who dissented from contemporary ways of educating young women, created a place where students could take on the then unheard-of tasks of learning foreign languages, studying arithmetic, history, and geography, and strengthening their athletic abilities. The year was 1843, and what Porter initiated has stood the test of time. Over the years Miss Porter’s has welcomed the likes of Jacqueline Kennedy Onassis and Gloria Vanderbilt , as well as academics like Emily Hale and Mary Anne Mohanraj, the actor Mamie Gummer, and the influential Buddhist teacher Pema Chödrön. Recently, applications to attend Miss Porter’s have increased, and currently the school has 335 enrolled students, more than it normally admits. The institution was considered visionary when it opened, and it is still today—and that vision is not narrow.

Windsor navigates her role with focus. Not only has she championed campus discussions about race, she spearheaded a campaign to celebrate Miss Porter’s first Black student, Dr. Glenda Newell-Harris, by naming a building for her in 2021. The first to be named for any person of color, the building lends some tangibility to the idea of belonging.

What a student will quickly learn when she arrives at Miss Porter’s School as a New Girl—as I did more than 30 years ago—is that no matter what she looks like or where she comes from, the spirit of diversity abounds. Students exemplify a range of classifications racially, socioeconomically, and in all manner of categories. The school signals to all involved that their voices will matter. “When the work ends,” Windsor says, “is when that diverse set of included girls and young women actually do feel that they belong.” 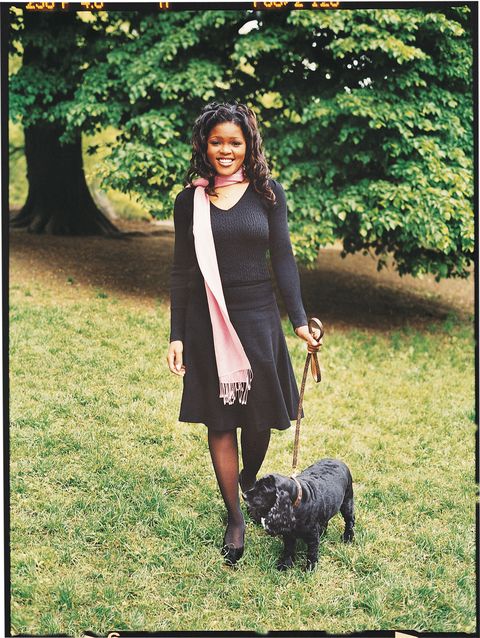 This writer of this story, Chrishaunda Lee Perez, a former student at Miss Porter’s, photographed on campus for Town & Country in 2003.
MIKI DUISTERHOF

It’s not just talk. In 2019 Miss Porter’s partnered with Sotheby’s for a different sort of mission with respect to women and inclusion. They hosted an auction titled “By Women, For Tomorrow’s Women,” featuring all female-made works, which raised millions of dollars for student scholarships. Co-chaired by Agnes Gund, a Miss Porter’s School graduate and art world eminence, and Oprah Winfrey, the auction also shifted misconceptions about women artists that underestimated their value.

Still, despite such efforts, there are those who wonder about the relevance of boarding schools today. Windsor speaks thoughtfully about this issue, which has generated more than its share of whispers. “It’s actually more relevant today than ever,” she says. “When you hear the perspective of Miss Porter’s students, you’re hearing the lived experience of people who have every conceivable makeup and background—food scarcity, war, the electoral process, and so on—which takes being part of a collective to a completely different level.” Translation: The Miss Porter’s School journey is also a constant teachable moment in empathy.

Education, and what should be taught as it evolves, is an eternally hot topic. Societies are split when it comes to discarding old habits in favor of the new, and Miss Porter’s School today is in the middle. Windsor says that despite the nearly two centuries since its founding, the institution very much reflects Sarah Porter’s imagination. Certain antiquated practices are welcome because they instill a sense of purpose. Traditions of old, like weekly sit-down dinners, passing down personalized songbooks, and giving students the time-honored Miss Porter’s School class ring, still become cherished memories. (As for the ring, it is a wearable symbol of a bona fide sisterhood; it unifies an intentionally intimate and varied student body. And it can make for a life-changing happening when an alum recognizes it on a stranger.)

"Miss Porter’s was considered visionary when it opened, and it is still today."

Though the school’s motivations are clear about the future, “Ancient” is the title that graduates receive, because at Miss Porter’s, a graduate’s relationship with the school does not end, it transforms.

Ancients and incoming students alike can be proud that Miss Porter’s has chosen to hold on to certain traditions while also changing policies to reflect evolving times. As of three years ago Miss Porter’s School replaced its semester calendar with trimesters, adopting a schedule popular in higher learning. Financial literacy has long been mandatory, and how it’s taught evolves to empower students to learn about the value of money and how to use it to determine their own futures. The motto “[preparing] young women to shape a changing world” is better executed when the students can experience the world, so each one is given an opportunity for international immersion. The school handles the distractions of social media and other diversions with understanding, meeting the girls where they are, helping them find balance in what might lie ahead instead of preaching to ignore, and by acknowledging that some of it is nothing new. This level of comprehension and self-awareness lays the groundwork for an autonomous life.

Because the students, while at Miss Porter’s, feel they have a rightful place at the table, graduates go out into the world and follow in the footsteps of the founder, becoming pioneers. The school offers a particular blend of evolution and holding on to elements of the past that still serve their purpose. After all, how can you change the world if you don’t allow yourself to change with it?

How to Write a College Application Essay