The remains of the drunken shrimp had just been cleared, and three couples awaited their dessert at Mr. Chow Beverly Hills when “it got a little tense,” recalls one member of the group, a philanthropist and fifth-generation Angelena. The talk had turned to November’s Los Angeles mayoral election, between six-term Democratic congresswoman Karen Bass and billionaire real estate developer Rick Caruso . The philanthropist and her husband are ardent Caruso supporters—he’d had dinner at Caruso’s home earlier in the week—and tempers flared when another member of the party, an old-guard agent, cited supposed sins of Caruso’s, such as having wanted to get rid of the Original Farmers Market when building the Grove in 2002.

“You don’t want to say, ‘You’re wrong.’ You want to keep it social,” says the philanthropist. “Also, should everyone be held responsible for their past sins? I wanted to tell him, ‘I know you worked with Harvey Weinstein. You found your moral compass now?’”

Today in Los Angeles, the upcoming election is a showdown fit for the screen, with each candidate representing David to the other’s Goliath, depending on the storyteller: Caruso, the media-besmirched political outsider who has dedicated his life to the betterment of the city, and Bass, the lifelong public servant who would be the first woman and second Black mayor of Los Angeles, who has to contend with Caruso’s self-funded media blitz. 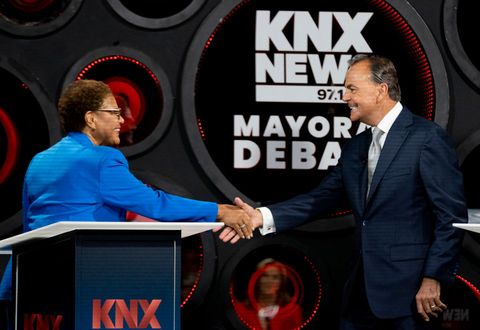 Los Angeles mayoral candidates Karen Bass and Rick Caruso, seen here at an Oct. 6 2022 debate. The race between the two is uncommonly dramatic for the city, and has split it along some unusual lines.
Allen J. Schaben // Getty Images

“There is definitely a hesitancy to discuss your mayoral choice in social settings,” says a local elected official who hasn’t yet endorsed either candidate. “If you’re at a dinner party and you’re a Karen supporter, people may think you’re soft on crime and too woke. If you support Rick [people may think] you’re a dilettante. There’s a resistance to say which side you’re on because of the disdain from the other camp.”

While whoever wins in November will govern a city of nearly 4 million people (Beverly Hills, Santa Monica, and West Hollywood have their own mini-mayors, but none is as powerful or as important to have on speed dial), the race has been particularly divisive for the city’s chattering class, with competing fundraisers being held across the West Side, and virtue signaling and impatience being doled out like awards season screening invitations. “I think Hollywood is a reflection of the entire city. There are really people on both sides,” notes political strategist Bill Carrick. “Typically in this race, the polling is more consistent, more predictable. In comparative races in the past the front-runners were well defined; that’s not the case here.”

Both Bass and Caruso, who are running to replace two-time, termed-out mayor Eric Garcetti, have continued to surprise voters as their respective campaigns have waxed and waned. (This election employs a so-called jungle primary, in which candidates of all parties run together and the top two vote-getters advance to the November general election if neither receives more than 50 percent of the vote.) 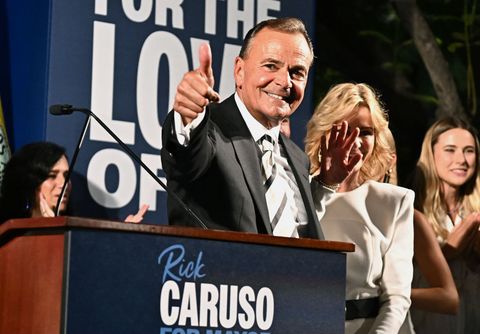 Prior to his run for mayor, Caruso was best known as a real-estate developer whose projects have included The Grove and Santa Barbara’s Rosewood Miramar Beach.
Wally Skalij // Getty Images

Historically, mayors’ races in Los Angeles have been between veteran elected officials who got into the campaign early. Carrick cites the contentious 2013 election, between Garcetti and Wendy Greuel, but “that didn’t have the fire, drama, or spending of this race.” The high profile of this year’s election seems to be the result of a perfect storm of a media bonanza (thanks to Caruso’s spending), a city facing rising crime and an unparalleled housing crisis, and a frustration with national politics that has renewed people’s interest in local elections. “I think this is a proxy battle among left-of-center people,” says a Topanga Canyon–based politico-turned-screenwriter. “It’s a way for the moderate left and the far left to have it look as if it’s about this candidate or that candidate. Each camp thinks the other camp is idiotic.”

So what is it about this race that has riled up Tinseltown? Does Caruso reflect a national shift toward tough-on-crime, law-and-order candidates, or is the prospect of having the mayor on speed dial simply an irresistible feather-in-cap for Hollywood eminences?

In many ways, stumping for a mayoral candidate is the perfectly sized political potato, as it offers the intimacy of a local race but the potential power of influencing the titan of your town. “I think Rick has some sexy heavy-hitter friends, and there’s an element of, ‘What can that person do for me?’ ” says one Democratic fundraiser who is backing Bass. “When we should be talking about what this person can do for an entire city. But that’s L.A.: It’s always a popularity contest.”

There’s a resistance to say which side you’re on because of the disdain from the other camp.”

Caruso is inarguably a popular guy. A visitor to his Montecito country club (where the members include mega-manager Scooter Braun and Netflix honcho Ted Sarandos) describes the pool as being ringed by middle-aged moguls in matching navy caruso for mayor baseball caps. The 63-year-old Los Angeles–born heir to the Dollar Rent a Car fortune is responsible for some of Los Angeles’ most beloved (and also derided) shopping utopias, but he has galvanized a cadre of celebrities and other heavyweights who have traditionally played it safe by supporting nationally approved Democratic stalwarts.

A former Republican who registered as a Democrat just weeks before delcaring his candidacy, Caruso is campaigning on traditionally conservative talking points, which makes him an unusual cause célèbre in defiantly Democratic Los Angeles. In May, Kim Kardashian, a vocal advocate of criminal justice reform, released a video endorsement on Twitter saying, “I think that he can really help with the crime in our city, which is such a big issue and super-scary.” Other Caruso supporters range from Gwyneth Paltrow to Snoop Dogg. Elon Musk made a rare political statement on Twitter, saying, “Executive competence is super-underrated in politics—we should care about that a lot more!” One Democratic fundraiser notes, “I think a lot of the celebs supporting Rick are surprised by the backlash, at the eye rolling and disdain Rick and his supporters have received.”

Indeed, the specter of a Caruso win has caused pearl clutching among the town’s Porsche Progressive establishment. “It has been shocking to see the support for him on the West Side of L.A. It comes down to rich people supporting rich people,” says an executive at Creative Artists Agency who has been aghast at the number of Caruso signs in Brentwood yards. A local politician adds, “I’ve been in these rooms. Rick is friends with celebrities and influencers and can talk about the same problems as them, about the hot new restaurant in Venice and the homeless encampment behind it. They get excited when he says, ‘I can fix it.’”

Celebrities like Ariana Grande and Shonda Rhimes have voiced their support for Karen Bass.
David Crotty // Getty Images
While the likes of Gwyneth Paltrow and Snoop Dogg have stumped for Rick Caruso.
Brian Stukes // Getty Images

In addition to endorsements from President Biden (she was on the shortlist to be his 2020 running mate) and Hillary Clinton, Bass, 69, has rallied such pop culture figures as Steven Spielberg, Shonda Rhimes, J.J. Abrams, and Jeffrey Katzenberg to her camp. There has been conflict: When a Katzenberg-backed PAC supporting Bass aired a TV spot analogizing Caruso with Donald Trump and calling him a “fraud,” Caruso personally called out Katzenberg and sent a cease-and-desist letter. Bad Robot Productions co-CEO Katie McGrath notes, “Races are now avatars for tribalism instead of community. It’s everywhere, not just L.A.”

Considered a telegenic Mike Bloomberg who has embellished Los Angeles with Disneyesque retail utopias (Caruso cites Walt as an inspiration), the candidate has supporters who see the promise of a go-get-’em business tycoon who will turn crime-addled Los Angeles into the Magic Kingdom. Indeed, it’s hard not to see echoes of the national political situation in what could otherwise be just a local election. “The post-Trump hangover creates a visceral response to anyone who superficially looks like him,” says one local political consultant, referring to the labeling of Caruso by some critics as L.A.’s Trump: another wealthy white real estate tycoon. But as the philanthropist from Mr. Chow asks, “Why is it bad if someone is successful? I’d rather have a winner than a loser. He’s led organizations with thousands of employees. Karen’s a sweet grandma. How many staff members do you think she’s ever had?”

Bass supporters parry that if elected, Caruso—who has served on the Board of Water and Power Commissioners, acted as president of the Los Angeles Police Commission, and was until last February chair of the board of trustees at the University of Southern California—will be a general without an army. “Running a business where you can tell your direct reports what to do is a lot different from being mayor of Los Angeles,” says entertainment lawyer Nina Shaw, who co-hosted a fundraiser for Bass. McGrath, who hosted a Bass event with her husband J.J. Abrams, at the offices of Bad Robot, adds, “She builds consensus with dignity. The opposition has labeled her a career politician, but that’s not it. She’s a true public servant, in the finest, most meaningful sense of the word.”

I'm smart enough to know my audience. I know who not to bring this up with."

It’s clear that both sides have informed, thoughtful reasons for supporting their candidate—but in a town used to being split over matters like gold statuettes, is this level of political division something that can be overcome? “I am smart enough to know my audience,” says one Caruso-supporting local who has attended Democratic events, including a backyard concert featuring Carole King. “I know who not to bring this up with if I want to have a nice evening.”

But biting your tongue isn’t a long-term plan. “There’s a Mad Max feeling rising in the city right now,” says one local filmmaker. “The stakes seem really big,” says Brian Goldsmith, a media consultant who advised Pete Buttigieg’s presidential campaign. “L.A. is a wonderful place to live, but it has deteriorated dramatically in the past five to 10 years. People here used to mock how apocalyptic San Francisco seemed—and now that’s us.”

Nicole Avant, a film producer and former U.S. ambassador to the Bahamas, says, “We are at what may be a tipping point for this city. We can’t support the status quo when it is not working.” She and her husband, Netflix’s Sarandos, hosted an event for Caruso at their Hancock Park abode—something the former Obama administration official doesn’t think should be a shock. “There should be no surprise here,” Avant says. “I am again supporting a solutions-based, positive change agent.” As for the impact of the race on Hollywood’s behind-the-scenes social swirl, Avant says, “Our dinner parties are always filled with adult conversations between people who do not always agree but know how to have a respectful conversation.”

Katie McGrath adds, “I’m always game for a hearty debate, regardless of the setting. That said, this town doesn’t hold fast to much for very long.”

In a city that’s used to rivalries—for money, for power, for awards—this may be a heated moment, but it won’t keep political adversaries estranged for long. “This campaign is not uniquely divisive, but passions can run high,” Avant says. “There’s a reason they call these things races.”

This story appears in the November 2022 issue of Town & Country. SUBSCRIBE NOW

The Aftermath of the $1B Paul Allen Art Sale

How To Handle a Billion-Dollar Divorce